Where & How the Perdomo Fresco is Made 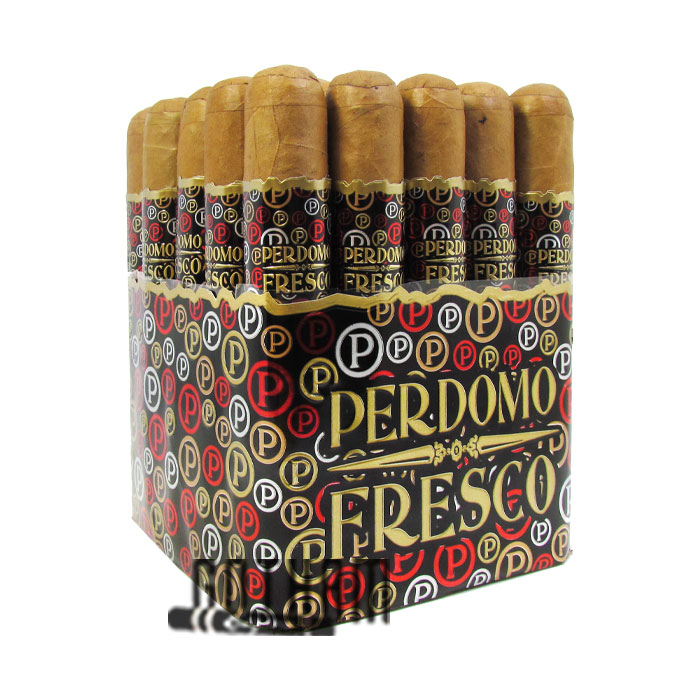 There are three types of cigars sold under the Perdomo Fresco name: the full-bodied Maduro, the mild-bodied Natural, and the medium-bodied Sun Grown. The Natural is also known as the “Connecticut.” All of these varieties are made in Nicaragua. Specifically, they are made at the Perdomo factory in Esteli, one of the Nicaraguan cities that is most known for cigars.

The Types of Tobacco Used in the Perdomo Fresco

The Perdomo Fresco Connecticut has an Ecuadorian Connecticut wrapper, which gives this variety its name. Its filler and binder are both made from Cuban-seed Nicaraguan tobacco. This cigar’s light brown wrapper hints that it is a mild variety.

The Sun Grown, as with the Connecticut, gets its name from its unique wrapper. It has a Nicaraguan Sun Grown wrapper to go along with Cuban-seed Nicaraguan filler and binder tobacco.

The Maduro has a dark Nicaraguan Maduro wrapper. As with the Connecticut and the Sun Grown, the Maduro’s filler and binder are Cuban-seed Nicaraguan tobacco.

The Perdomo Fresco Connecticut was chosen for this review. It comes in a bundle of 20 cigars. Upon a pre-light inspection, the Ecuadorian Connecticut wrapper looks a bit dull. It certainly does not look as impressive as the other Connecticut cigars offered by Perdomo. However, it does have just the hint of an oily sheen. The cigar feels to be quite well packed, which is a bit surprising given its affordable price point. The wrapper does have a bit of veining. It is sent off by an attractive red and gold Perdomo brand. The aroma off the unlit cigar is of sweet tobacco. The cold draw gives off a surprisingly flavorful taste of molasses, with just a hint of oak in the background.

The initial flavors of the Perdomo Fresco Connecticut are of cedar, which was unexpected as neither the smell test or cold draw produced even a hint of cedar. There are appealing sweet undertones throughout the first third of the cigar, with notes of licorice present. There is even an appealing hint of nuttiness that does well to balance out the cigar’s flavor profile. As you smoke through the first third of the cigar and approach the mid-third, a delicious taste of rich cream develops and the cedar flavor starts to fade slightly. The licorice flavor also starts to fade as the cigar burns into its mid-third portion.

The cedar flavor continues to fade and the rich cream notes get stronger as the cigar transitions to its mid-third portion. The nutty flavor that first appeared in the first portion of the cigar gets stronger, but it does not become overpowering. A pepper flavor begins as a background note and strengthens to become one of the cigar’s main flavors. The combination of several strong flavors gives the Perdomo Fresco Connecticut an intense flavor profile, though it has to be said that it does not have the most complex or subtle taste. However, the intense flavors are well- balanced.

The cigar continues to burn evenly throughout the mid-third, and it has a nice full body that stays consistent throughout this portion of the stick.

The peppery flavors that came to dominate the mid-third of the Perdomo Fresco Connecticut continue to be at the forefront during the final portion of the cigar. The delicious taste of sweet cream fades away quickly once the cigar burns into its final third. The nuttiness fades a bit, but it stays in the background throughout the final third of the cigar. A hint of toast starts to come through as the stick burns down. The finish of the cigar brings back the notes of oak and cedar from the cigar’s first third, bringing the smoking experience full-circle in a somewhat poetic manner. The cigar smokes evenly and coolly all the way down to the nub, which is a pleasant surprise for a stogie at this price point.

In conclusion, the Perdomo Fresco is a good cigar bundle for the money. It comes in three blends that range from mild to full-flavored, providing every cigar smoker with a variety that meets their preferences. The Fresco blends are not likely to be found in any of Cigar Aficionado’s year-end best-of lists. However, it should be noted that the majority of cigars found on these lists are unaffordable for the average cigar lover (except perhaps on special occasions). It pales in comparison to these premium cigars, but it should really only be compared to other bundle cigars. The Fresco blends are good for a tasty everyday smoking experience that will not break the bank. These cigars are among the best you can find at this price point. While we reviewed the Connecticut in this article, you may want to get a bundle of each variety to see which blend you prefer.