How & Where the Alec Bradley Project 40 is Made

The Type of Tobacco Used for the Alec Bradley Project 40

As you might expect for a cigar made in Nicaragua, the Alec Bradley Project 40 is composed primarily of Nicaraguan tobacco. The wrapper is Nicaraguan, and so is the filler. The binder, however, is a Brazilian Habanero. This type of tobacco is fairly rare in cigars sold in America. It originally comes from Cuba and is named after the capital city of Havana.

The name "Project 40" was chosen by the owner of the brand, Alan Rubin. It refers to a motivational principle that states that people are ultimately in control of their own happiness. According to the brand, the positive cognitive effects from smoking a cigar can contribute to this happiness. The brand notes
that cigars have a calming effect akin to fine music.

Now that we've gone into the background of the cigar, it is time to get into the tasting notes. The Alec Bradley Project 40 has been very highly acclaimed since its initial release in 2019. In fact, Cigar Aficionado gave it a 93 rating, which is truly exceptional for a cigar that costs around $5 each. The Alec Bradley Project 40 was even named a "Top 25 Cigar in 2019" by Cigar Aficionado. It certainly has a lot to live up to. We taste-tested a Project 40 Toro. 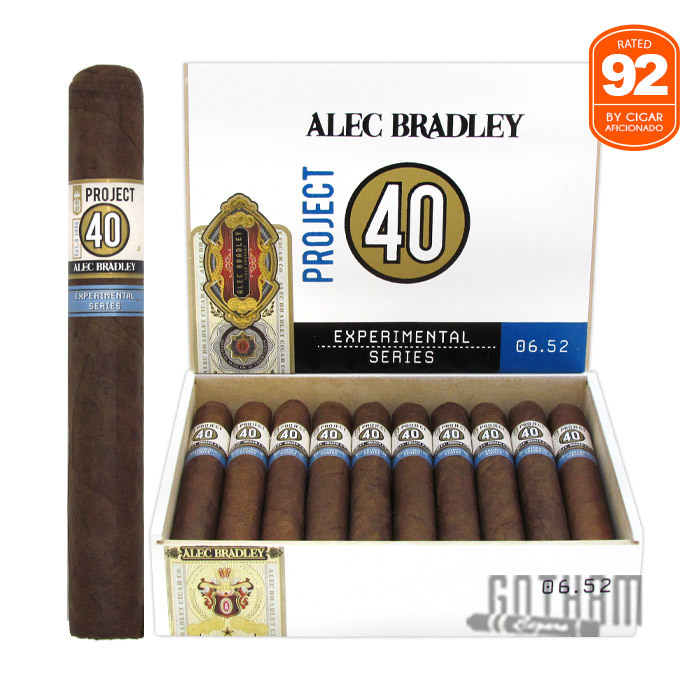 The Alec Bradley Project 40 Toro comes in a medium-brown wrapper with light veining. It has a very slight oil sheen. There are two wrappers on the cigar. The primary band says "Project 40," while the smaller band reads: "Experimental Series." The cigar is quite light, though it is well-packed.

The aroma of this cigar is an interesting hint of carrot, though there is an exciting undertone of sweetness. The cold draw brings out the same flavors, only much stronger.

As you move into the mid-third of the cigar, the sweet flavors that had dominated the profile up to that point slowly start to fade into the background. The sweet essence of the cigar ends up disappearing around the halfway point of the mid-third. Notes of black pepper and coffee begin to dominate the cigar's flavor profile, and there is a perpetual earthy undertone. As you smoke through the mid-third, brief flashes of sweetness add a dynamic character to the cigar's flavor. The earth, black pepper, and coffee flavors continue as you finish the middle part of the cigar and move onto the final third.

While there are better cigars out there, there may not be a better cigar at this price point. As Cigar Aficionado said, this cigar has a level of quality seen in cigars that cost twice as much. This cigar is an excellent overall smoke. The first third is truly exceptional with its complex and dynamic sweetness. This cigar could have been rated even higher if its mid-third and final third lived up to the first third. While the mid-third and the final third of the cigar are not quite at that level, these sections of the cigar are still lively and flavorful. The end of the cigar even brings back flavors of raisins and almonds that were first seen in the first third. The bottom line is that the Alec Bradley Project 40 is a top-notch cigar, especially at its surprisingly low price point.