The Aging Room Brand is run by partners AJ Fernandez and Rafael Nodal, both of whom have had long and successful careers in the cigar industry. AJ Fernandez has made some of the world's best cigars in his factories for decades. Nodal, on the other hand, took a small, failing cigar company in Miami and turned it into one of the leading premium cigar brands in the world today.

This isn't the first time that the two men have worked together. In fact, Fernandez and Nodal collaborated on the new offerings from legendary brands Romeo y Julieta and Montecristo. Nodal owns Aging Room, while Fernandez oversees production. Aging Room has had several hits, but their most acclaimed and iconic offering is the Quatro Nicaragua.

Where & How the Aging Room Quatro Nicaragua is Made

As the name suggests, the Aging Room Quatro Nicaragua is made in Nicaragua. It is one of the most acclaimed non-Cuban cigars ever, which is hardly a surprise when you consider that it is handmade at AJ Fernandez’s factory, which has produced many highly-rated cigars. As you would expect from a premium cigar, it is handmade by highly trained artisans. The cigar is box- pressed, which leads to a very tight and firm construction.

The Tobacco Blend Used in the Aging Room Quatro Nicaragua 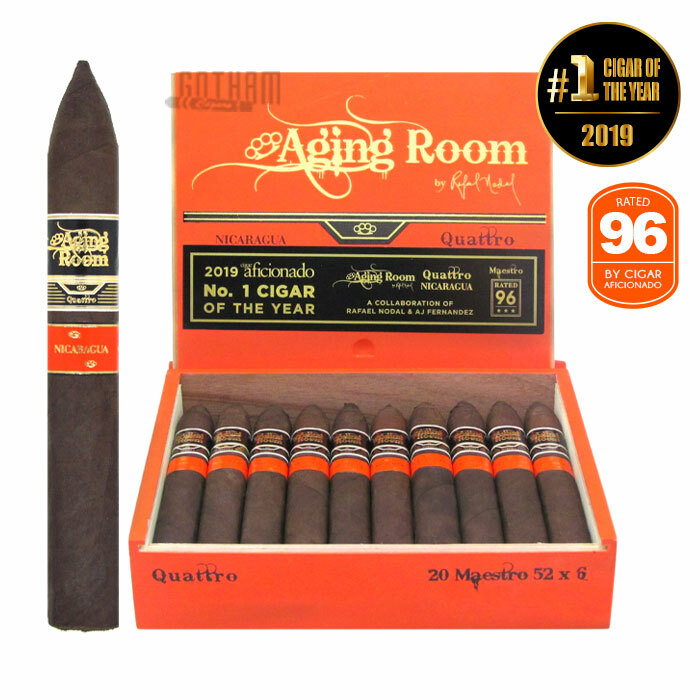 Nodal wanted the Quatro Nicaragua to be special, so he personally tested several different blends before settling on the blend found in the final product. The filler and binder tobaccos are made from premium aged Nicaraguan leaf. The star of the show, however, is the Nicaraguan Sumatra wrapper. Nodal certainly did a good job selecting the blend for the Quatro Nicaragua, as it earned a 96 rating from Cigar Aficionado. This is one of the highest ratings that Cigar Aficionado has ever given.

The Quatro Nicaragua is very striking, with a dark brown wrapper that shows only a few faint veins. It has a tight and perfectly symmetrical box-pressed torpedo shape, which is characteristic of a premium cigar. The black and gold Aging Room band is a bit old-fashioned, but it does look classy. The cigar also has a smaller orange band with “Nicaragua” printed on it. A cold draw revealed notes of earth, cocoa, and coffee. The pre-light aroma of the cigar is a faint earthy scent.

The cigar has a black pepper flavor right off the light. However, this peppery note quickly fades. The earthy notes that were present on the pre-light draw and sniff return after a few draws. These earthy flavors are enhanced by notes of wood and leather. The leather flavor fades away as the cigar approaches the mid-third portion, though the earth and wood notes remain.

The cigar burned quite evenly throughout the first third, which indicates that is was made properly. The tight white ash that it produced also is also indicative of quality tobacco and exacting construction. 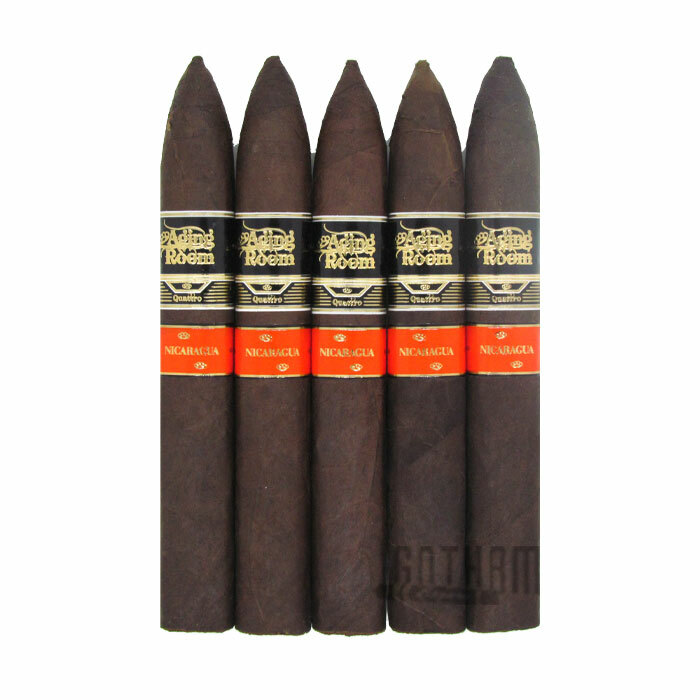 The mid-third starts off with the earthy and woody flavors from the first third, though these notes are quickly joined by a number of other flavors. Delicious notes of dried fruit and coffee become evident. There is even a slight hint of dark chocolate that becomes more prominent as the wood and earth flavors start to fade slightly. The cigar slowly starts to develop a sweeter flavor profile as the mid-third burns down.

The ash stays tight and white, which is what you want from a premium cigar. However, it should be noted that the Quatro Nicaragua does start to burn a little unevenly. I even had to touch it up a little with my lighter, which shouldn’t affect the flavor too much (though it is a pet peeve of mine).

The Quatro Nicarágua really distinguishes itself as a premium cigar in its final third. The wood and earth flavors that had already started to fade in the mid-third disappear completely. In their place is a delicious flavor of rich cream. This delectable rich cream flavor continued throughout the rest of the cigar, even when it burnt down to the nub. The smoke stayed smooth and cool, and there was no harshness from the nub. Of course, this is what you would expect from such a highly rated premium cigar.

The cigar continued to produce the tight, white ash that is such an important indicator of quality. While I did have to touch up the cigar a little in the mid-third, the Quatro Nicaragua burned evenly throughout the final third, even towards the end. Only the absolute best cigars maintain both their flavor and form all the way to the nub like the Quatro Nicaragua does.

The Aging Room Quatro Nicaragua is the best cigar currently available from the highly acclaimed Aging Room brand, and it is made by the legendary AJ Fernandez. It may very well

be the finest cigar available today. It isn’t exactly cheap, though premium quality never is. While the Quatro Nicaragua might not be a daily smoker, it is the perfect cigar for celebratory occasions. Every cigar lover should try the Quatro Nicaragua at some point. Though this fine cigar is produced in small batches, it is not a limited release. This means that any cigar lover with a few bucks to spend can get their hands on one.