Partagas is one of the oldest and most prestigious cigar brands. The brand originated in Cuba in the 19th century. The brand was owned by the Cifuentes family for many years. However, the Cuban government nationalized the brand after the Cuban revolution. Ramon Cifuentes restarted the brand in America, with distribution from General Cigar. Partagas picked up right where it left off, continuing the brand's tradition of commercial success and critical acclaim. Partagas is now distributed by Forged Cigar Company, which is a subsidiary of Scandanavian Tobacco Group.

The Partagas Cortado is the brand's newest offering. While the brand is known for its dark, full-bodied cigars, the Cortado offers a lighter smoking experience. Though the cigar was only just released, it has already started to receive critical acclaim.

Where & How the Partagas Cortado is Made

The Types of Tobacco Used in the Partagas Cortado

The Partagas Cortado features a unique blend of tobacco that gives it a flavor profile never before seen in a Partagas cigar. The defining characteristic of the Cortado is certainly its Ecuador Connecticut wrapper. This is what gives the cigar its lighter, more mellow flavor.

Ecuador Connecticut tobacco is grown in Ecuador with seeds from Connecticut. Connecticut tobacco usually must be grown in cheesecloth tents to preserve its light flavor, but Ecuador is cloudy enough that this is not necessary. The Cortado's binder is made from Indonesian tobacco. Its filler tobacco is a blend of Honduran Jamastran, Mexican San Andres, and Nicaraguan Jalapa and Condega.

The Partagas Cortado has the sort of creamy, light brown appearance that is typical of cigars with Ecuador Connecticut wrappers. It is not very oily, though it does have a slight sheen. The cigar does have a surprising amount of veining, which is not typically seen in Ecuador Connecticut cigars. This may put off some cigar lovers. The cigar has a large red and gold band that includes the classic Partagas logo. The band is quite large, perhaps too large for the tastes of many cigar aficionados. It does only have the one band, while many modern cigars have two.

The pre-light smell of the Cortado is creamy with a slight hint of pepper. This is unsurprising, given the Ecuador Connecticut wrapper and the spicy Jalapa tobacco included amongst the filler blend. The pre- light draw reveals much the same flavor profile: cream and spice, with an appealing hint of dry almonds.

The Partagas Cortadostarts with flavors of cream, spice, and almond, which is exactly what you would expect given the pre-light smell and taste. Shortly after lighting, an appealing hint of chocolate joins the flavor profile. At this point, the spicy flavor starts to fade into the background, leaving a delicious flavor of creamy chocolate at the forefront. The almond flavor continues to round out the flavor profile, though it is not as strong as the cream or chocolate flavors.

The hint of pepper that appeared in the pre-light smell and draw begins to return as the first third of the cigar transitions to the mid-third. The almond flavor fades away, and the creamy flavor gradually becomes less prominent as the pepper flavor becomes stronger. The cigar takes an appealing flavor profile of spicy chocolate. 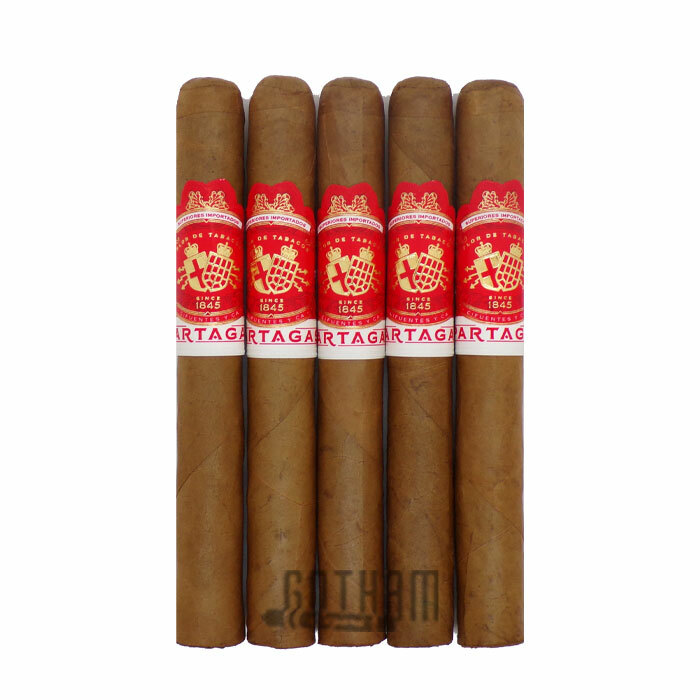 The pepper flavor becomes stronger as the Cortado transitions into the final third. This is common with many premium cigars, even cigars with a more mellow body. The hint of almond returns, forming a unique bet delicious flavor profile dominated by pepper and fruit with hints of almond and chocolate underneath. This makes the Cortado's taste reminiscent of a gourmet chocolate bar.

The Cortado burns evenly throughout, with firm ash that does not disintegrate easily. The ash is a very light gray, which is what one would expect from a mellow cigar. As the Cortado burns down to the nub, the flavors of black pepper and almond come to the forefront. The cream and chocolate flavors fade away entirely. However, the cigar's almond flavor continues to give it a mellow taste. There is no harshness or heat, even towards the nub of the cigar.

The Partagas Cortado is Worth a Try

All things considered, the Partagas Cortado is an excellent cigar that is well worth its reasonable price point. Fans of the Partagas brand should give the Cortado a try, as it offers the same premium experience with a new flavor. Cigar lovers who prefer lighter, more mellow cigars should also give the Cortado a try, as it is one of the best on the market with this sort of flavor profile. The Partagas Cortado is a worthy addition to the offerings from one of the cigar world's most prestigious and historical brands.