Size: x
This item is no longer available. Check out our selection of lighters here.   If you are searching for a powerful but affordable cigar lighter, the quad torch lighter with 4 flames is the...

Size: 6 x 60
Free Gift!
Camacho Corojo BXP Gordo cigars are were already some of the boldest cigars out there, but now they are even bolder. Utilizing the unique blend of three Corojo primings as long fillers and a Corojo...

Size: x
MSRP:
Now: $6.50 - $9.99
Was:
Colibri Premium Butane is the cleanest butane available at 99.9994% purity. This pure butane won’t clog your lighter with contaminants, leading to fewer time spent cleaning or replacing your...

Size: 6 x 50
Free Gift!
MSRP: $195.00
Now: $42.88 - $155.50
Was:
Camacho Connecticut Toro is a smooth and creamy cigar with full flavor in a mild to medium bodied smoke. Handmade in Honduras, this blend features a golden Ecuadorian Connecticut wrapper draped over...

You can never discuss Camacho without talking about the decadent Corojo Cuban Seed that rewrote Camacho’s future and put Honduras on the tobacco map. Perfected in the early 1940s, the Corojo Cuban Seed was Diego Rodriguez’s labor of love. This man created this seed by isolating the Mesoamerican Criollo strain and then crossing it with an Indonesian Sumatra strain. To this day, the Corojo Cuban Seed is revered for its bold, in-your-face profile, and incredible elasticity.

After the Cuban revolution, growing the Corojo seed in Cuba became problematic. As a result, Daniel, Diego Rodriguez’s son, smuggled a whole bunch of Corojo Cuban Seed out of Cuba. Eventually, Daniel and his Corojo seeds settled in the Jamastran Valley, Honduras. The weather and soils were close to the Cuban Vuelta Adajo area, Corojo’s original home.

However, even with the ideal weather and soils, it took close to 40 years for Daniel Rodriguez to master growing the Corojo seed in Honduras. Through sheer determination and a love for the process, the Corojo Cuban Seed was finally back on Camacho cigars.

Simon Camacho passed on in 1990. Five years later, Camacho was acquired by the Eiroa family. The Eiroa Family, of Caribe Imported Cigars, were also Ex-Cubans who were now growing tobacco in Honduras. As a result, Camacho facilities were moved from Nicaragua to Honduras.

Under the Eiroa Family, Camacho grew exponentially throughout the cigar boom of the 1990s. This is because even under the Eiroa Family, Camacho cigars were still under the Camacho family (Christian, Simon Camacho’s son was the president of Caribe Imported Cigars). In 2008, Camacho was again acquired by the Davidoff Family together with its Rancho Jamastran factory in Danli. The Eiroa family kept their Honduras tobacco farms.

Under Davidoff, Camacho has really come into its own. Now, Camacho produces over 20 million cigars a year. Plus, it grows its own Corojo seeds and has evolved into an edgy brand welcoming off-the-beaten-path rugged fans without excluding the rest. That’s not all.

Camacho began to adhere to strict environmental guidelines for good agriculture and manufacturing practices. This is after Camacho partnered with Bayer CropScience. To date, Camacho is the only tobacco company that complies with the Bayer guidelines.

I told you Camacho is a powerhouse brand. On top of all the aspects we have discussed, Camacho has one more Ace up its sleeve. It’s the Powerhouse Bunching.

Powerhouse bunching is a proprietary tobacco bunching and rolling method. Even though Camacho remains tight-lipped about the exact science, we can speculate about the process. Rather than bunching and rolling the cigars in a snail-shell-like manner, Camacho torcedors also fold the tobacco like a concertina. The resulting stick is a uniformly packed stogie with no soft spots or knots. Each Camacho cigar uses powerband bunching, which enhances airflow as well as the perfect milkshake draw.

In truth, it is a tad difficult to determine the first-ever Camacho blend. That being said, I compiled a list of the oldest and most popular Camacho blends. In a word, I want to offer some insight into the bold, complex flavor profiles that Camacho so effortlessly presented. 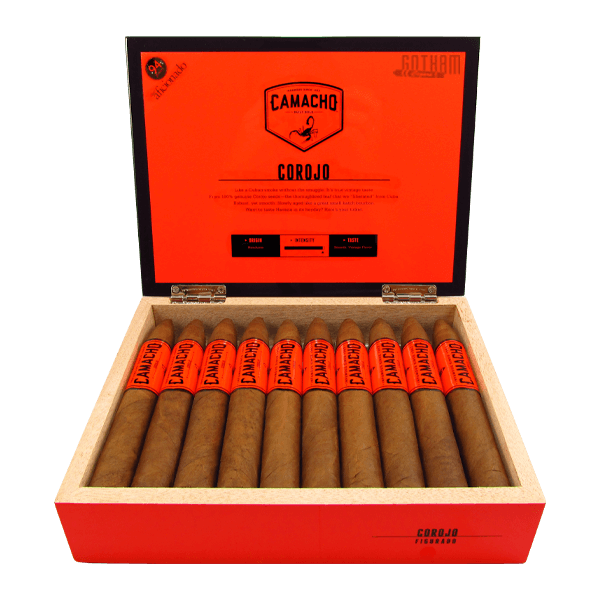 As for the tasting notes, this stogie is bad ass! If you are a lightweight smoker, stay away. The Camacho Corojo comes out swinging from the first draw. Expect bold, spicy notes with underlying cedar, sweetness, earth, and dry barnyard notes. The pepper is very commanding both on the palate and retrohale. Overall, the Camacho Corojo cigar is perfectly balanced with an impeccable burn line and flawless draw. 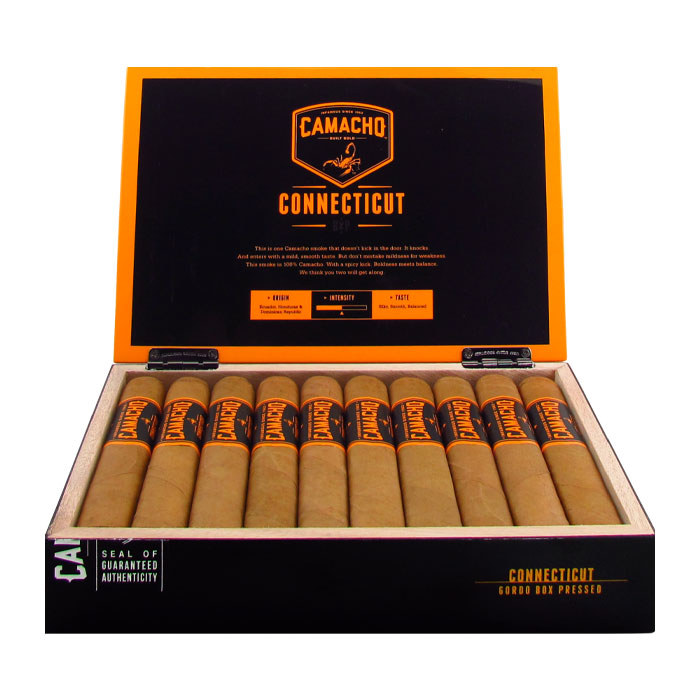 Camacho wanted to be more approachable to the newbies. In truth, before Camacho Connecticut, all the other Camacho cigars took no prisoners. But this baby is different. Camacho Connecticut has a milder approach. The site description put it this way.

“This is one Camacho smoke that doesn’t kick in the door. It knocks. And enters with a mild, smooth taste. But don’t mistake mildness for weakness. This smoke is 100% Camacho. With a spicy kick. Boldness meets balance. We think you two will get along.”

I found this cigar to be extremely pleasant and quite tolerable, even if you aren’t a spice kind of person. Of course, the peppery kick is there, but everything is toned down and oh so creamy. Camacho Connecticut is a combo of Honduran Generoso and Aleman Ligero fillers, a Honduran Corojo binder, and an Ecuadorian Connecticut Shade wrapper. Flavor notes include sweet hay, cedar, earth, citrus, molasses, and the signature peppery kick.

Camacho was and still remains the undisputed master of complex and subtle blends. They have upheld the traditional Cuban-style cigars while at the same time embracing new technologies. The bottom line is, you can never go wrong with a Camacho cigar.