Size: 6 1/2 x 50
MSRP: $52.60
Now: $39.38
Was:
Casa De Garcia Nicaragua Churchill is an affordable bundle by Altadis that is hand rolled in the Dominican Republic. This is a fuller bodied blend than the original Connecticuts and features a...

Size: 4 3/4 x 50
MSRP: $41.60
Now: $32.79
Was:
The Casa de Garcia Connecticut Robusto is a premium cigar that offers an original tobacco experience to cigar enthusiasts. These cigars are specially made to produce a mild smoke and splendid aroma...

Size: 6 1/8 x 52
MSRP: $51.60
Now: $40.75
Was:
Casa De Garcia Connecticut Belicoso is a great, affordable offering by the makers of Montecristo cigars and hand rolled in the Dominican Republic. The blend features a premium selection of Dominican...

Size: 4 x 38
MSRP:
Now: $85.00
Was:
Perdomo Reserve Champagne 10th Anniversary Puritos is a delectable cigar. Featuring a unique blend of Cuban seed Nicaraguan tobaccos that have been expertly aged for a minimum of six years and a...

Size: x
MSRP: $61.51
Now: $49.99
Was:
This Cigar Aficionado Starter Kit supplies you with everything you need to keep your cigars fresh like a pro. You get a gorgeous, mahogany glass top humidor that holds up to...

Casa de Garcia Connecticut Toro cigars are premium cigars with distinct flavor and a pleasant mild smoke, owing to its unique blend of superior quality tobacco fillers that are grown in Honduras and the Dominican Republic. After they are blended and bound by Connecticut binders, the cigars are encased in Connecticut Shade wrappers, which can be distinguished by its light brown color. The Casa de Garcia Connecticut Toro is ideal for smokers who lean toward cigars that have a mild smoke and a consistent aroma. The flavors that are imparted in the cigar stay constant throughout the stogie, from the cap to the foot.

The length of these toros measure up to 5 1/2 inches in length and they have a ring gauge of 50. The rich and creamy flavor of these cigars, which are produced in Dominican Republic, come with the pleasant and rich aroma that makes it quite popular among cigar smokers. 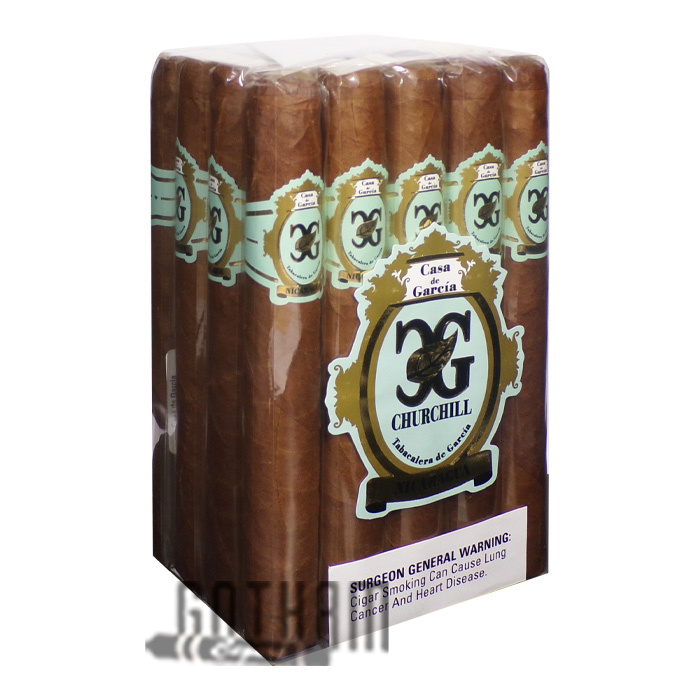 I went with a Robusto for this review. The truth is, Casa de Garcia is a rough cigar to gaze upon. It‚Äôs mottled and rough to the touch. It‚Äôs got veins and visible seams. But it‚Äôs not light like most budget cigars. There are no soft spots. The foot and shaft give off pleasant hay and aged tobacco aromas. Upon lighting, my Casa de Garcia Robusto opens with subtle wood, leather, and a little pepper at the back.

The pepper creeps up the retrohale and a little zing remains on the tip of my tongue. It‚Äôs worth mentioning that not all Casa de Garcia Nicaragua will have the same flavor profile. There will be variations in the pepper intensity among other differences. I think it's because they use leftover fillers from the premium smokes rolled in the same factory. More flavor notes include oak, espresso, raisin sweetness, and vintage leather. Even though there are no transitions, this cigar holds up in consistency, construction, and smoke output.

The burn line needs no touch ups whatsoever. However, it burns like a mixed filler smoke which translates to flaky ash so watch out. Amazingly, and probably its best selling point is the fact that all the way to the nub, this cigar never gets bitter. It maintains an aristocratic aged tobacco nuance that is wonderfully satisfying. I‚Äôve had some Casa de Garcias that have been a straight up pepper bomb. It works if you‚Äôre a pepper person. If not you can just toss it and grab another.

If you‚Äôre a heavy smoker like yours truly, it makes sense to have a decent budget-friendly everyday smoke. A $5 cigar five or six times a day will leave a dent on your wallet. But a $2 or less cigar that hits the right spots works just as well except you‚Äôll have $3 or $4 saved.

Which of the Casa de Garcias have you tried? Do you have a favorite Casa deGarcia? What was your experience? Share with us.