Punch Signature Rothschild is a 90 rated blend hailing from Honduras. Featuring a distinct blend of vintage tobaccos from the Dominican Republic and Nicaragua and a Nicaraguan binder. The core is draped in a seamless Ecuadorian Sun Grown Corojo leaf wrapper that is a deep reddish brown that contrasts beautifully with the black and white band. The result is a rich, medium to full bodied smoke with complex flavors brimming with notes of cedar, dried fruit, cocoa, spice and leather that is both flavorful and aromatic. Punch Signature Rothschild is 4 1/2 x 50 and available in attractive boxes of 18 cigars. 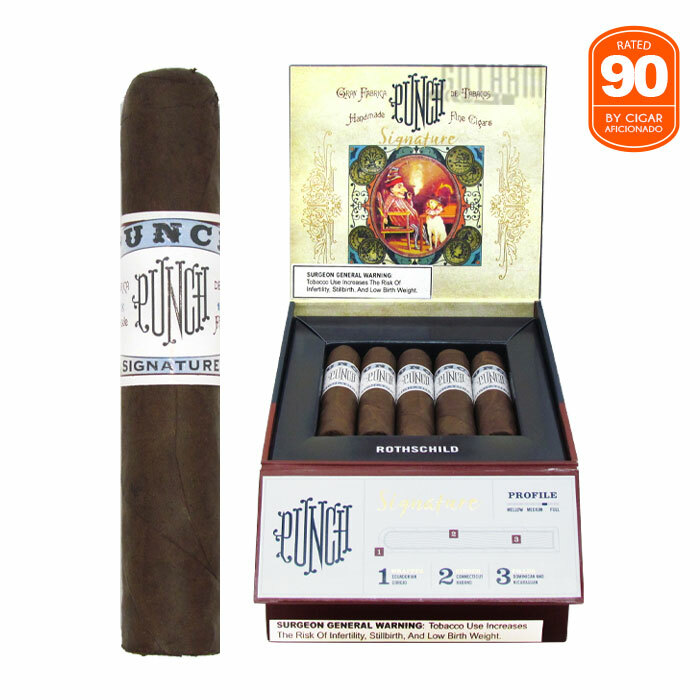 We reviewed the robusto vitola of the Signature. The Punch Signature comes in boxes of 18 that have a solid blue and red coloration. The first thing that jumps out when you actually take out a cigar is the large white band. The original Punch logo is printed in black on the front of the band, while the ‚ÄúPunch‚Äù character is printed on the back of the band.

The Punch Signature is very well-constructed, with a solid and tight feel. The wrapper is very oily, and includes several large veins. If you look closely, you can spot a few seams. The pre-light aroma of the Signature is faint and composed of a leathery scent. A pre-light draw gives flavors of leather and a hint of cedar.

The Signature took a few tries to light fully. This is common for cigars with very oily wrappers. The Signature has a fairly firm draw, so you have to draw a bit harder than usual. It starts to crackle and sizzle after a few draws. The flavors begin with a strong cedar note that is quickly joined by notes of earth and jalapeno peppers. This blend of cedar, earth, and jalapeno dominates the Signature‚Äôs flavor profile throughout the first third of the stick.

As the Signature burns down to the end of the first third, the burn line becomes a little wavy. However, it does not get to the point where it negatively affects the smoking experience. The medium-gray ash is a little flakey, but it still holds well. 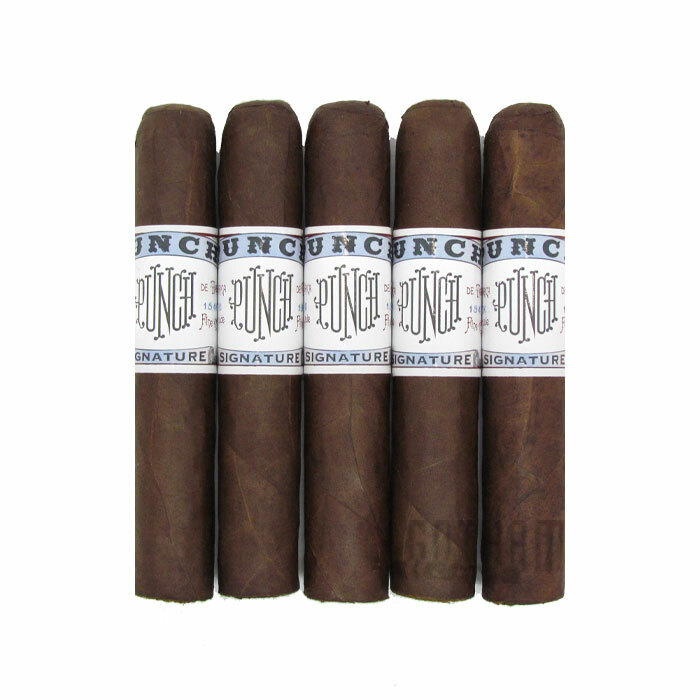 The toasted cedar flavor that was dominant through the mid-third portion of the cigar stays at the forefront throughout the Punch Signature‚Äôs final third. The pleasant milk chocolate and chili pepper flavors that made the mid-third of the cigar so special fade away early in the final third. The toasted cedar flavor is instead augmented by a lovely note of roasted almonds. The roasted almond flavor appears in the midst of the final third, and lingers throughout the rest of the cigar.

Though the wavy burn line did make me a bit wary, the Signature‚Äôs premium construction ensured that the cigar burned relatively evenly the whole way. The ash even held throughout the cigar, and I didn‚Äôt have to touch it up once.

The Punch Signature is an Affordable, Yet High-Quality Cigar

In conclusion, the Punch Signature is exactly what you want from a relatively affordable premium cigar. It has a dynamic and bold flavor profile and offers a smooth smoking experience. Considering the price of the SIgnature, it meets or perhaps even exceeds my expectations. I would recommend that cigar lovers who want a unique smoking experience on a budget try the Punch Signature.