Size: 5 1/4 x 42
You can taste a beautiful blend of multiple flavors when you light up a Rocky Patel Royale Corona. The ballroom of flavors feature hints of cream, coffee, pepper and citrus. While the coffee flavor...

Size: 5 1/2 x 50
MSRP:
Now: $128.49
Was:
Rocky Patel Grand Reserve Robusto features a proprietary blend of Rocky Patel's oldest tobaccos that have been aged an additional two years. This luxurious blend has notes of chocolate and dried...

Size: 5 x 49
MSRP: $474.95
Now: $76.16 - $360.80
Was:
Cohiba Robusto cigars are handmade by the best in the business in the Dominican Republic with specially selected Cuban seed tobaccos, an Indonesian Jember binder, surrounded by a vintage, aromatic...

Size: x
MSRP: $199.00
Now: $134.99
Was:
The Gotham Cigar of the Month Platinum Membership is our customers’favorite membership plan! Enjoy six months of premium cigars hand selected by our knowledgeable staff delivered right to your...

Rocky Patel Number 6 Corona received an astounding 95 rating. Described as a masterpiece, this cigar features a blend of Nicaraguan and Honduran tobacco fillers, a Honduran binder and a seamless Honduran Corojo leaf wrapper. The result is wonderfully balanced flavors including notes of vanilla, orange peels, black pepper, honey and a naturally sweet finish. Rocky Patel Number 6 Corona is 6 x 44 and available in attractive boxes of 20 cigars. 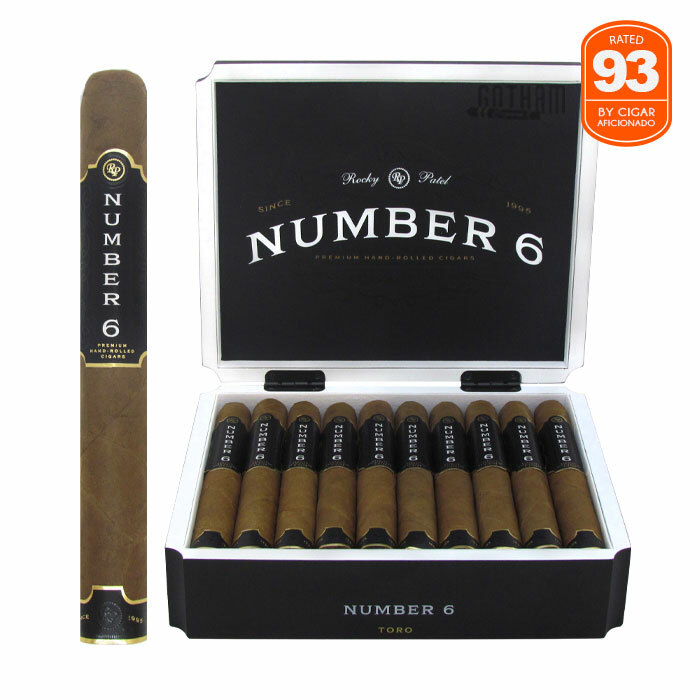 We decided to go with the toro vitola of the Rocky Patel Number 6. The Number 6 is available in five vitolas, including Corona, Robusto, Toro, Sixty, and Churchill Shaggy Foot. Upon first glance, this is a great-looking cigar. The cigar is a dark tan with an oily sheen. It has two black, gold and white bands, with the large primary band covering nearly a third of the cigar. It is firm to the touch and well-capped.

When we were finished admiring the cigar, we gave it a good sniff. The Rocky Patel Number 6 has a pleasant aroma with hints of fruit and buttermilk coming through a nice pungency. We cut the cigar at the shoulder before sampling its flavor. A few dry puffs produced flavors of salt, pepper, nut, and a bit of earthiness. After taking in the cigar‚Äôs aroma and sampling its flavors, we lit and began the first third.

The Rocky Patel Number 6 has a pleasant white pepper flavor upon the first few draws. The white peppers fade away as cedar flavors come through. Sweet, grassy notes slowly start to join the primary cedar flavor at this point. From here, creamy flavors begin to come on. These creamy flavors eventually resolve into a delicious caramel sweetness at the end of the first third. This creamy sweetness continues as the first third burns down and transitions to the mid-third.

A light creamy flavor continues into the last third of the cigar. Hints of salt and butter slowly take over the flavor profile. A hint of bitterness comes in at the nub. This may be the Rocky Patel Number 6 Toro‚Äôs only major flaw. The last third is still quite enjoyable overall.