Everyone who professes a love and knowledge of cigars must have come across the Ashton brand. And not because it’s an old brand or because it releases new cigars every year; no. It’s because somehow, Ashton has managed to etch an eternal place at the table of the greats. It’s such a pleasure today to be reviewing one of the most awesome cigars of all time; the Ashton Classic. It’s even better because Ashton Classic is where it all began. So, before we unveil the subtleties of Ashton Classic, let’s lay a little groundwork.

Ashton began in 1985. The founder, Robert Levin is a living legend in the cigar market. Levin grew up working at Holt’s Cigars, his father’s company. As a result, Levin mastered the cigar business early. This enabled him to exponentially grow his father’s company after taking over from him in the 1970s.Holt’s Cigar Company was and still is a wholesaler and retailer of cigars. It was founded by Albert and Jean Levin, Robert Levin’s parents. After Robert Levin took over Holt’s Cigars, he decided to create cigars of his own; the first of which was the Ashton Classic. Needless to say, Ashton Classic has been a wild success since it’s debut in 1985.One of the obvious secrets to Ashton’s success is quality. Without the least bit of exaggeration, Ashton cigars are among the most consistent in overall quality. This has a lot to do with the fact that all Ashton cigars are rolled at the Tabacalera A. Fuente factory. The Fuente Family name is synonymous with flawless construction and impeccably rolled cigars. Ashton history is a tale of incredible business apprehension that I could tell for days. But this is Ashton Classic’s day.

I mentioned in passing that Ashton Classic is where it all started. Originally, Ashton Classic was made by Taba Dom (Tabacos Dominicanos). Taba Dom, founded by Kelner, is now a part of Davidoff. Later, Levin shifted production of Ashton to the Tabacalera A. Fuente factory in the Dominican Republic.

Since the debut of that first Ashton Classic cigar, it’s been close to 40 years of lip smacking deliciousness and unparalleled consistency that has kept this cigar in the “Top 3” most popular cigars in the US. I must mention that the original Ashton Classic was reinvented in 1989 under Carlos Fuente. The new blend introduced a Connecticut Shade wrapper into the mix. To this day, Ashton is a household brand ferrying all-time favorites including Ashton Aged Maduro, Ashton Cabinet, Ashton ESG, Ashton VSG, Ashton Symmetry, and Ashton Heritage. Every additional Ashton line perfectly compliments this quintessential brand.

I’ve been deliberate in pointing out that Ashton Classic has been in the market for a long time. I should also mention that it is sold in over 60 countries across the world. Just why is this cigar so popular? Ashton Classic is a decadent mellow bodied blend of Dominican premium fillers and binder. These leaves are aged at least 3 to 4 years before being rolled. The wrapper, as earlier alluded is a US-grown Connecticut Shade leaf from the Connecticut River Valley. After rolling, these Ashton Classics are then aged in cedar chambers for an additional 6 months. The result, as you will soon find out in the tasting notes is a superbly balance stogie. In fact, this is the best first time cigar.

For a cigar that has been around for close to four decades, every review is a testament to consistency. I’ll be going with a Churchill for this review. My Churchill is a tall flawless golden blonde tower of sweet smelling tobacco. Sweet cedar notes with underlying nutty nuances waft off the shaft.
It’s a smooth silky shaft with barely visible flat veins and well done seams. There’s a shiny sheen on the stick and no soft spots. Cold draw conveys light nuts, grass, graham cracker, and implicit cedar. The draw is the perfect milkshake consistency.

A Churchill is a massive cigar. I will definitely enjoy this more than usual. My Ashton Classic opens with lots of warm creamy nutty notes. Some pepper is present to balance the pleasant warm ambience. Yet it’s not really pepper but more of a sweet spice that tastes more like nutmeg (perhaps because of the nutty profile already present).Sweet cedar comingles with the nutty creamy notes to add to the smooth transition.

Shy hay notes come into the picture followed closely by a basic earth tone at the very end. The finish is long and deliciously winding. This cigar deserves every compliment it’s accumulated over the years. It’s always in total control of it’s own transitions; taking you on a leisurely flavor cruise. The burn and ash are beyond perfect. I’m in my happy place. 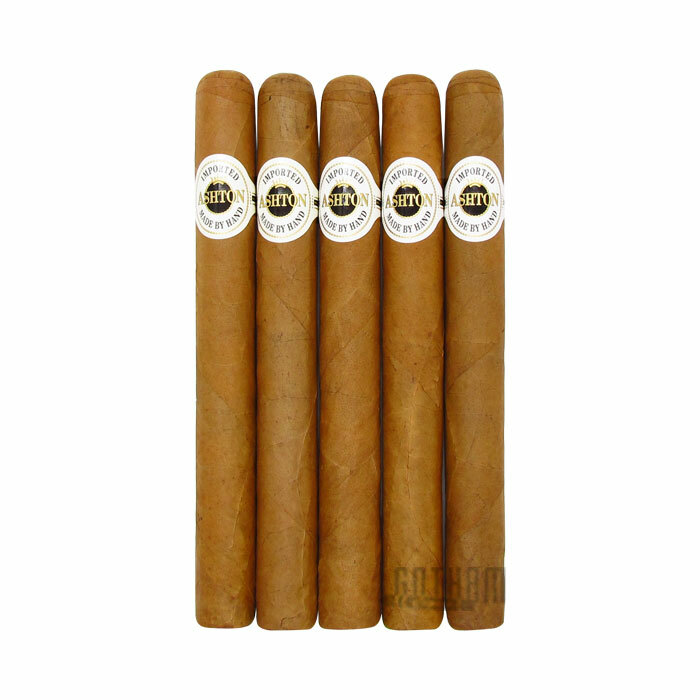 Here’s how to know you’re in the mid third; the nutty sweetness intensifies. Sweet espresso joins the symphony. Hay notes, though still mild, sashay in the background. Sweetness seems to have increased too. The spice is the perfect balance to bring it all together. I can’t stop obsessing about the finish. Smoke outlines of hay, cedar, sweet spice, vanilla, coffee, nuts, cinnamon, and nutmeg remain on the palate until the next draw. The cream is lulling my palate like a sweet lullaby. I haven’t spoken about the delicate billows of aromatic smoke all around me. At this point, I can’t tell if I’m smoking this baby too fast or if I’m taking too long between draws; I’ve entered a realm of perfect enjoyment. Hazelnut nuances, graham cracker sweetness, cinnamon, roasted almonds, cappuccino, vanilla, and creamy sweetness usher me into the final third. I can barely feel the nicotine and yet I’m not jittery; what a cigar!

In the final third, cedar jumps to the front of the palate but is still enveloped in tons of creamy sweetness. There’s a new flavor and that is cloves. It’s more of a subtle but distinct zing on the tip of my tongue. Leather also joins the exquisite camaraderie of flavor notes accosting my palate. Loads of sweet creamy mocha, coffee, cinnamon, spice, cedar, earth, and a little peppery heat dominate the last draws of this incredible smoke. As I put my nub down, I recommit myself to a lifetime of Ashton Classics. It was an absolutely satisfying experience.

After all these years, I am now convinced that even if you pick up an Ashton Classic in the next decade, it will be like the one I just smoked. And now you know why Ashton is perennially among the Top 3 most sought after cigars in the US. If you’ve never had an Ashton Classic, I will just go ahead and assume you’re a newbie to which I will say; Go Now.