CAO is one of the brands owned by the General Cigar Company. One of CAO's best-known cigars was the Zocalo, but CAO also has a number of other well-known lines. CAO makes most of its cigars in Nicaragua, including the Zocalo. Read on to learn more about the history of the CAO Zocalo.

The History of the CAO Zocalo

The CAO Zocalo was previously released as a limited-run in 2018. It was quite popular at the time, but supplies were quickly sold out and the CAO brand moved on to other cigars. However, CAO has listened to repeated demands from their customers to bring back the Zocalo, and they have decided to make it a permanent line. Not only are they making the Zocalo a permanent line, but they are also expanding the line into different sizes. The 2018 release of the Zocalo was limited to 3,500 boxes of 6 x 60 sticks. This 6 x 60 size returns, although it is now called the "Gigante" size. In addition to the Gigante size, the Zocalo is available in Robusto and Toro sizes.

The Zocalo was named after a city square in Mexico City. Both the box and the bands on the cigar use the colors of the Mexican flag. The brand is named after a location in Mexico because it is one of the relatively few cigars to use a Mexican wrapper. In fact, it is the first cigar from CAO to use a wrapper from Mexico.

Where & How the Cao Zocalo Cigars Are Made

As previously mentioned, the CAO Zocalo is made in Nicaragua. Specifically, it is made in the well-known STG Esteli factory. The Zocalo is hand-rolled, which is what you would expect from a premium cigar.

The Types of Tobacco Used in CAO Zocalo Cigars

We've already covered the unique Mexican wrapper. The other types of tobacco used in the Zocalo include a distinctive Cameroonian binder and Nicaraguan filler (which you'd expect from a Nicaraguan factory). 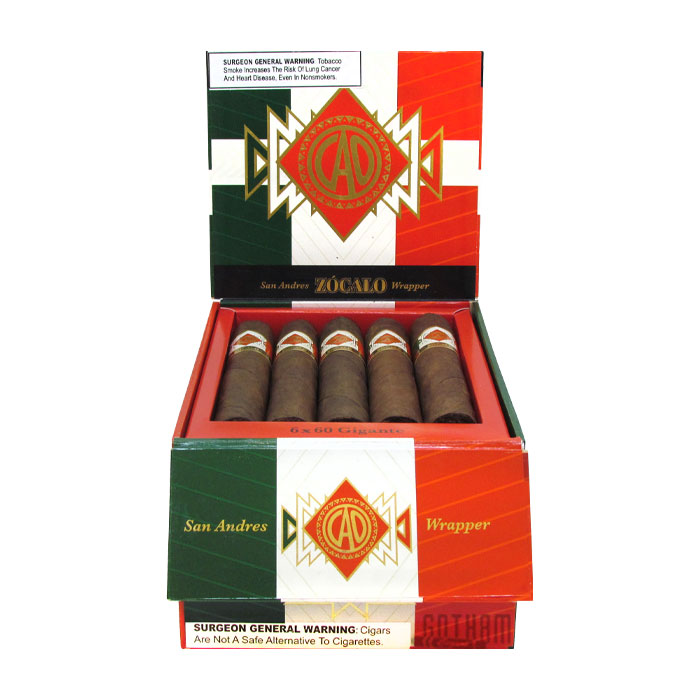 The CAO Zocalo is a very visually striking cigar, as its Mexican wrapper is an extremely dark brown. The dark brown coloration is even over the entire cigar. The Zocalo also has an oily sheen. The striking CAO Zocalo brand in the Mexican flag colors is sure to catch the eye before you actually light up the cigar. The Zocalo has sweet, pleasant aromas of brown sugar and spice. A cold draw revealed earthy flavors that bordered on musky. The difference between the aromas and the cold draw is striking.

The cigar burns very evenly throughout the first third, and the smoke is thick and full-bodied. The musk flavor becomes stronger as the first third ends and the cigar transitions to the flavors of the mid-third.

The musky flavor from the first third quickly becomes the dominant flavor of the cigar as we move onto the mid-third. The sweet flavors are still there, however. They simply sink to just beneath the surface of the Zocalo. The cherry and chocolate are even joined by a hint of nutmeg. These sweet flavors balance the dominant musky flavor throughout the middle portion of the cigar. Even the delicate hints of floral flavor from the first third show themselves on occasion in this portion of the cigar. As the middle third of the cigar starts to burn down, the oak flavor replaces musk as the dominant flavor.

The musk and oak flavors that were dominant throughout the mid-third blend together nicely at the beginning of the Zocalo's final third. Remarkably, the cigar's flavor profile stays consistent throughout the whole stick. The sweet flavors of cherry, nutmeg, and dark chocolate that began in the first third of the cigar are still evident in the final third of the Zocalo. In fact, these flavors hold true until the Zocalo has been smoked down to a nub.

It takes about an hour and a half to finish the Zocalo. The final few draws are just as smooth as the first few, with no harshness ruining the final part of the cigar. There wasn't even an increase in the heat of the smoke as the cigar burned down.

The CAO Zocalo is Worth a Try

In conclusion, the CAO Zocalo is an excellent premium cigar that is certainly worth a try. Cigar lovers of Mexican heritage may find themselves drawn to the Zocalo, as it has a Mexican wrapper, is named after a place in Mexico City, and features the colors of the Mexican flag on both the box and the band. The Zocalo is also great for smokers who prefer a stable flavor profile throughout their smoke. If you really like cigars with dynamic flavor profiles that change throughout the smoking experience, the Zocalo may not be the right choice for you. Otherwise, it is certainly worth a try, especially now that it is much more readily available.