There’s a brand-new cigar on the market, and it’s a doozy. The new cigar, Dias De Gloria by AJ Fernandez, is creating a feverish whoop-de-doo among cigar enthusiasts.

Everyone knows that AJ Fernandez is unrivaled as a blender. To him, blending comes naturally. And rightfully so.
AJ Fernandez is a 3rd generation cigar savant and one of the most sought out blenders of our time. He is so attuned to tobacco and blends that after blending for his own company, he has the virtuosity to create unique blends for other companies and competitors.

Ultimately, the result is always a well-orchestrated smoke, supremely balanced, and flawlessly constructed. And this time is no different.

This is an excellent cigar. Why, you ask? Because Dias De Gloria, Spanish for “Days of Glory,” is specially blended to pay homage to the pre-embargo days in Cuban history. Abdel J. Fernandez wanted to recapture the flavors his father, Ismael Fernandez, remembers from the glory days of pre-Castro Cuba. But hold on a minute; this baby is a Nicaraguan Puro! Absolutely no Cuban seed whatsoever!

Instead, the Dias De Gloria encases delicately aged Nicaraguan tobacco harvested from four of AJ Fernandez’s oldest farms in Estelí, Nicaragua. They include La Providencia, La Soledad, La Lilia, and Finca Los Cedros. In his own words, “These are the four oldest farms I own,” says Fernandez, “and I’ve been setting aside tobacco from each farm and aging it for years for this blend. I want everyone to enjoy it like the glory days of old Cuba.” In fact, some of the tobacco leaves used in this blend aged for 7 years! The binder is Nicaraguan while the wrapper is an impeccable Nicaraguan Habano leaf.

The Toro size is exquisitely trunk-pressed. Did you know that this is not the first time Dias De Gloria is hitting the market? Well, it’s true! AJ Fernandez soft-released Dias De Gloria back in early 2017. However, he quickly pulled it from the market, saying he needed to concentrate on the vast array of cigars already in his portfolio. We are glad that AJ Fernandez took his time to release this masterpiece. The 2019 IPCPR show was perfect timing. Now we can sit back and intrinsically rock what he is rolling-so to speak.

I have been holding off on discussing the flavor profile on this bad boy until now. The reason being this is a new cigar. There is not much on the internet regarding how it smokes or tastes. Most reviews refer to the flavor profile as sweet, cedary, earthy, and spicy. They have not nearly begun to do this cigar justice. For my review, I went with a Toro. It’s such a beauty with that delicate box press. My mouth is already watering.

The Dias De Gloria presents with an immaculate wrapper, no tooth, smooth as silk. It is halfway covered with a cedar wrap and embellished with the signature ornate AJ Fernandez bands. The wrapper is rife with notes of mixed spices (perhaps curry, ginger, and black pepper). Creamy cedary notes emanate from the foot.

Cold draw speaks of a sweet barnyard nuance comingled with floral notes, milk chocolate undertones, and a spritz of black currant. I may have tasted a bit of black pepper, shy notes of anise, and a robust black coffee base. Even from the cold draw, you can already tell this is going to be a complex stogie. Before we go into it, I decided to do this review in two sections instead of my usual three. This is because later, I want to do another review. Ideally, after the cigar has been in the market for a while.

You can’t conclusively determine the rating of a new cigar for two reasons. One is consistency. A cigar needs time, and a couple of hundred thousand productions to determine if the quality is consistent. Two is aging. This is especially true for master blenders like AJ Fernandez. A cigar like this one will drastically improve with a little time in the humidor. In a word, like a fine piece of art; rating cigars cannot be rushed.

My Dias De Gloria opens with a tsunami of peppery cream. The spice is on my tongue and the back of my throat. But the cream covers it like a thick coat of paint. On the side-lines are nuances of black coffee, sweet brown sugar, a skosh of fruity tang, and delicious spicy ginger. Still somewhere in there are nutty notes with decadent buttery flakes, sweet black grapes, and raisins.

The finish is a delectable heavy cream that feels like butter on the tongue. It lasts all the way to the next draw. Strength at this point is a good medium. I have a razor-sharp burn and solid ash. A few inches down, and the complexity kicks in. Spice takes a stand. It’s a savory mix of cinnamon, ginger, and flakes of red pepper. The cream morphs into delicious butterscotch. There is a dainty warm bread-like decadence bathed in a thick lazy flow of sweet buttery goodness. The earlier overbearing dark chocolate and espresso notes recede to the back burner. 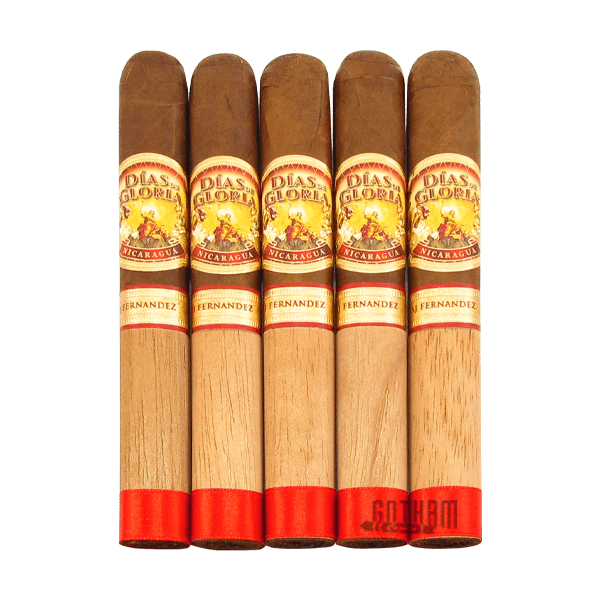 Past the halfway mark, the nicotine picks up. As this happens, the flavors shift to a savory, smoky, meaty flavor with a malty disposition. Spice never really leaves, and this time around, it’s a fusion of black, red, and white pepper, cinnamon, ginger, and jalapeno.

The sudden nicotine rush recedes. Or rather it is overtaken by warm sweet melted butter deliciousness backed by croutons of butterscotch. A whole nutty world opens up, dishing out notes of hazelnut, smoked almonds, and premium Brazil nuts. As I approach the nub, I can feel the strength inching up to a strong medium to full.

But that is not the focus. My cigar suddenly adopts an explosion of complexity and intensity. I am almost overwhelmed. There is a perfectly balanced symphony of spice. Buttery cream smoothness is on another level. Still, I am bombarded with perfectly poised amalgamated flavors that I cannot put my finger on. Strength goes up to a walloping full. This nub is intensely enjoyable; I do not want to put it down.

My Toro smoked for more than 2 hours. It was an incredibly slow burner. I almost cannot believe how good my Dias De Gloria was! I cannot wait for my other Dias De Gloria to age a little more. If it turns out that this cigar is regular production, I will never be without this bad boy.

How Has Dias De Gloria Performed So Far?

Dias De Gloria is doing very well. Word of mouth is spreading fast, and these bad boys are flying off the shelf. In fact, we (Gotham Cigars) sold out of our first shipment in no time. So, if you have not yet grabbed one of these, you are missing out!

Let us know your experience with this new cigar. We love to hear from you!