Rocky Patel is a living legend in the cigar world. In truth, his creations feature prominently in top cigars lists year after year. Also true is the fact most Rocky Patel cigars are quite pricey. They are not your everyday smokes that you can give away all willy-nilly. There are, however, some little-known budget-friendly cigars in the Rocky Patel arsenal. Our favorite is the Rocky Patel Cargo.

Every time I hear of Rocky Patel, my mind conjures images of premium top-shelf stogies in beautifully crafted boxes and equally high-strung price tags. But Rocky Patel Cargo is different. This modest cigar is a flawlessly constructed, decadent treat that you can have every day without breaking the bank.

If you have never heard of Rocky Patel Cargo, don’t feel guilty. With such an extensive portfolio of 90+ rated cigars, it is no surprise that a budget bundle cigar would be overshadowed. The good news is, once you have one of these, you will never be without them again.

Most people think Rocky Patel Cargo is a new release depending on the first time they hear of it. In actual sense, this stogie was first released at the 2010 IPCPR show. So, it has been around for quite some time. When Rocky Patel Cargo first came out, it was sold in two sizes only; Toro (6 x 52) and Toro Grande (6 x 58). Further, it was packaged in 500-count crates and 25-pound boxes. To this day, I don’t know what they were thinking.

It was a weird start but thankfully Rocky Patel redid the packaging as well as the Vitolas. Now Rocky Patel Cargo comes in 5 sizes namely:

Plus, it is packaged in cellophane-wrapped, 20-count bundles which is much easier to sell than the 500-count crates.

The Rocky Patel Cargo blend is basically what we call a Cuban sandwich. I am pretty sure you know what a typical Cuban sandwich is. Just in case you don’t, a Cuban sandwich is a delectable sandwich piled high with a variation of grilled ham, cheese, roasted pork, pickles, and a selection of other delicious ingredients.

The take away here is the mouth-watering deliciousness. Now, in the cigar world, a Cuban sandwich means any cigar filled with both long fillers and short fillers. Cuban sandwich style cigars are the perfect cross between long-filler and short-filler cigars.

Rocky Patel Cargo encases premium Nicaraguan long fillers peppered with palatable short fillers from Rocky’s 1961 and 15th Anniversary cigars. The result is a budget-friendly cigar offering top-shelf flavors from the short fillers as well as faultless construction and razor-sharp burn thanks to the long fillers.

Additionally, Rocky Patel Cargo features a Nicaraguan double binder swathed in a Connecticut Habano wrapper from Ecuador. Ideally, this is a medium-strength stogie that is supposed to be smooth and easy. As a side note, Rocky Patel’s 1961 was discontinued a while ago. We are yet to find out the new blend of short fillers used on the Rocky Patel Cargo. As soon as we know, you will too. 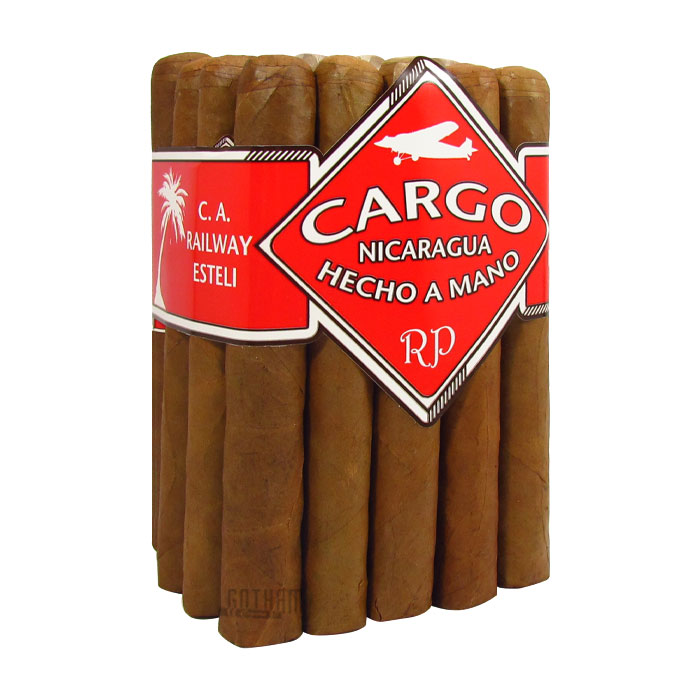 Something curious about Rocky Patel Cargo is the gentle box-press. Rocky Patel Cargo is not a box-pressed cigar but every RP Cargo I have seen seems to have a gentle boxy look to it. Perhaps it’s the bundle effect.
Moving on, I decided to go with the Toro. I have smoked a bunch of these already. Hopefully, you will like them as much as I do.

My Rocky Patel Cargo is nothing special to behold. The light brown wrapper is smooth with minimal veins and a solid feel. Upon inspection, there are no stretches or pulls; just uniform give all through. Overall, the cigar has a vintage old-school look to it.

The shaft smells of sweet hay, peanuts, earth, and caramelized sugar. Cold draw is all hay, cocoa, wood, leather, and an implicit kind of generic floral sweetness. The draw is quite tight; tighter than I would like but I am not drawing any conclusions just yet. Usually, I do my reviews in three parts (First Third, Mid Third, and Final Third). However, this is a budget cigar so we cannot expect much in the way of flavor transitions. This is why I will do this review in two parts.

My RP Cargo Toro opens with a somewhat snug draw and lots of smoke output. Dry cedar, chocolate, hay, and coffee are the first flavors that jump out. A few draws in, the smoke assumes a rich creamy texture that is very pleasant. There is a long, slightly sweet, earthy finish with a bit of white pepper on the retro. As the cigar progresses, the draw opens up and more flavors become apparent. I must say this cigar is more enjoyable than I imagined.

Dainty nuances of almonds (or is it peanut butter?), cedar, dry leather, and baking cinnamon spice linger on the palate. The cinnamon combines with cedar and a caramel like sweetness to create a unique exquisite flavor that I have never tasted before.

So far, the burn has been razor-sharp. The ash was a bit flaky but still held on for close to a third of the cigar. Strength is at a mild-medium and the body is medium at best.

Past the half-way mark, flavors stay consistent. There is, however, a fleeting rich, creamy vanilla note attaching itself to the cedar. Nutty notes tantalize the front of the palate with sweet tobacco and mild leather at the back and through the long finish. Undertones of cinnamon fuse with black pepper on the Retrohale.

Surprisingly, the construction of this cigar gets better as it progresses. By now the draw is near perfect and so is the ash. Smoke output was never at fault. Strength is medium and so is the body. Towards the nub, all the sweetness and creaminess disappear. All that remains are natural tobacco notes coupled with coffee and mild cedar undertones. My Toro begins to get warmer. Also, with every draw, bits of short filler tobacco end up in my mouth which is irritating to say the least. It’s time to call it a stogie.

Truth be told, this is a bundle cigar which also means it’s a cheap cigar. And obviously, you can’t expect the same experience you would get from a long filler cigar. That being said, the Rocky Patel Cargo is a great cigar for the money. At around $2 a stick, this bad boy is just complex enough to keep you interested throughout the smoke. The flavors are clean and crisp, lots of smoke output, and flawless construction.

Except maybe for the bits of short filler tobacco that fly into your mouth when you draw, this is an excellent cigar to have every day or several times a day with as many friends as you wish. As someone would say; this is the perfect cigar to give to someone who doesn’t know much about cigars. This way, if they don’t finish it; you won’t feel bad.

Share your smoking experiences with us. We love to hear from you.