Ever so often, the cigar world experiences a quirky new flavor that catapults itself from new to beloved in a matter of months. Cigar manufacturers constantly revamp their brands in a bid to attract a new kind customer. These innovative moves birth interesting flavors that sweep lovers of the leaf off their feet. One such flavor is the Russian Cream.

What is Russian Cream?

Russian Cream is a perfect storm of rich chocolate and cream tang on a bed of fleeting liquor, vanilla and vodka zest. This flavor pays homage to the age-old Russian Cream dessert that we all know and love.
The infusion of Russian Cream into cigars comes through the wrapper. Tobacco leaves or tobacco-infused smoking papers are soaked in Russian Cream to afford the cigar a rich chocolate-caramel and liquorish vanilla taste.

The Rise of Russian Cream 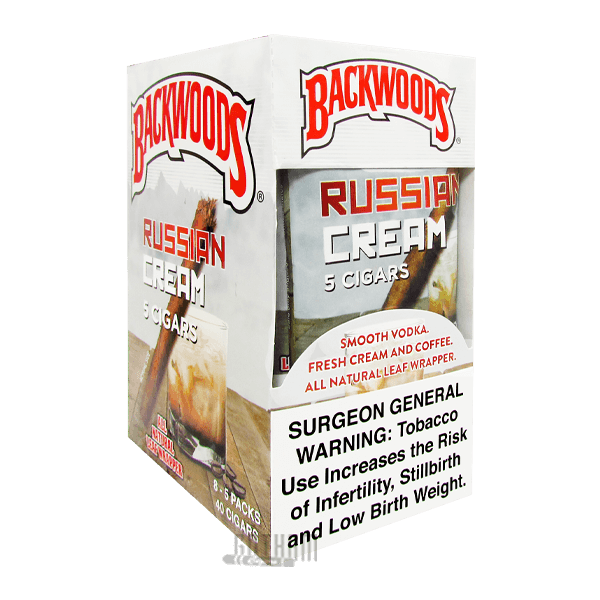 Backwoods is a formidable cigar brand that has its roots deep in the stogie universe. This brand is owned by Imperial Tobacco under Altadis US.
Backwoods are known for their flavor-filled innovative cigarillos that walk the line between premium hand-rolled and perfectly machine-made cigars. There is no limit to the lengths Backwoods go to satisfy their dynamic customers, evidenced by their plethora of flavor options. Thus, it is no surprise that they have their own Backwoods Russian Cream.
Backwoods Russian Cream is by far the most popular of all the Russian Cream brands. It is a divine limited production little cigar that stogie lovers just can’t get enough of.

The Backwoods Russian Cream features Caribbean Basin Cuban Seed short-fillers, a homogenized tobacco leaf binder, and an authentic Connecticut Broadleaf wrapper. The Connecticut Broadleaf wrapper is aged for a year to attain a sweet, mellow, ripened tobacco flavor.
Backwoods made their Russian Cream cigarillo to appear unfinished and sloppy. The body is tapered towards the end but the head is unfinished with tobacco fillers sticking out. Upon pressing the cigar, the body feels fairly soft and spongy which precludes an airy smoke thanks to the loose filling.

My Backwoods Russian Cream smells deliciously creamy with chocolatey notes. The cold draw gives off nuances of caramel, dry hay, and tiny bits of spice.
Word of advice; cut the frayed tobacco bits off the top of your Backwoods before lighting. It ensures the burn-line stays sharp.  The first draw is a bonified flavor bomb of sweet milk-chocolate, whipped cream, vanilla, a little nutmeg, and a whole lot of aromatic smoke. The front of my palate experiences fleeting liquorice tang while creamy tobacco sweetness holds down the fort.

This Backwoods is definitely not a premium smoke, but it tries to live up to its class. The body holds up pretty well throughout the smoke but it doesn’t linger for a long finish. There is no harshness or bitterness on the retrohale. Mine was a 15-minute smoke at the most and I enjoyed it quite a lot.

The Backwoods Russian Cream is a great cigarillo to have at hand whenever the craving strikes. It is extremely popular and somewhat rare which is why it is sold in limited capacity. So, if you end up liking them as much as we do, get yourself a packet or box. Backwoods Russian Creams cost a buck fifty a piece. 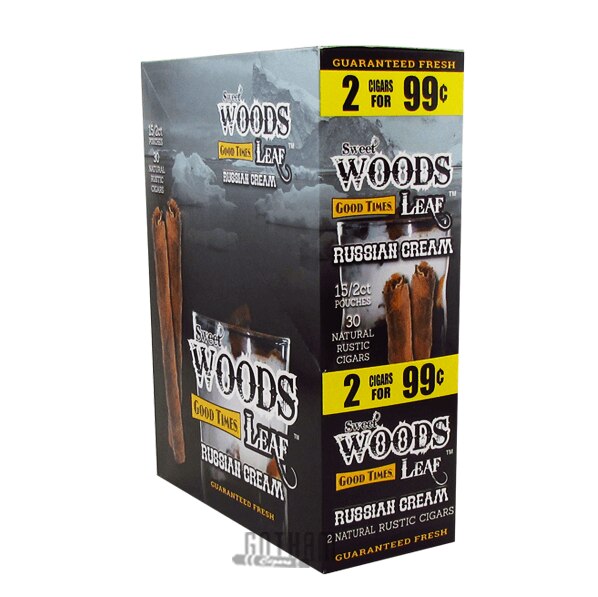 Sweet Woods is a cigarillo brand under the Good Times company. Good Times is a relatively new cigar company with an impressive line of budgetfriendly, machine-made cigars and cigarillos. The Sweet Woods Russian Cream are giving Backwoods Russian Cream a run for their money. For one, they are cheaper at 99 cents for a ziplockedpack two. Also, they use an authentic tobacco wrapper rocking the rustic, sloppy look which has become the signature for machine-made cigars with a hand-rolled mien.

My Sweet Woods Russian Cream is a delectable 4.2 by 27 ring gauge cigarillo with a sweet and creamy aroma. It features a Connecticut Broadleaf wrapper and Dominican short-fillers. The construction is soft and spongy.
On the cold draw, infused sweetness tantalized my taste buds. I got delicious milk-chocolate notes with dry hay and a cedary barnyard zest. The first draw gave tons of smoke with soothing aroma of toasted caramel and chocolate cream.

My Sweet Woods Russian Cream tickled my palate with a comingling of rich espresso, cocoa, nutmeg, liquor, and fleeting cedar flavors. The wrapper felt moistier than Backwoods. The back of the palate including retrohale exposed brown sugar notes, earth, smooth vodka, and sweet tobacco nuances. I have to admit I enjoyed the Sweet Woods Russian Cream a tad more than the Backwoods. The flavors were more robust plus my stogie lasted longer and burned cooler.

Mine was a sublime 20-minute smoke which left me satisfied and ready to stock up on Sweet Woods Russian Cream. Even though it is essentially the same flavor as the Backwoods, it has its own unique nuances that sets it apart. 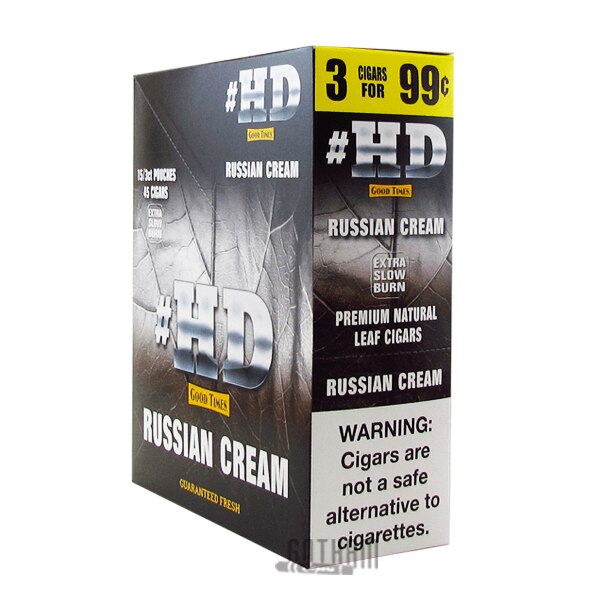 Good Times also makes this limited edition #HD Russian Cream. #HD Russian Cream is a cigar featured under the fusion line of Good Times. It measures 4.25 by 29.5 ring gauge which makes it longer than a typical cigarillo but shorter than a full-size cigar. The technical term for it is a blunt.
You know a flavor is great when the same company produces it twice. Good Times doubled down on this popular flavor producing the #HD Russian Cream as well as the Sweet Woods Russian Cream reviewed above.

#HD Russian Cream is a machine-made decadent little cigar that boasts Dominican short-fillers and a cream-infused Homogenized Tobacco Leaf wrapper. Since it’s not draped in a natural leaf wrapper it is cheaper than the Sweet Woods Russian cream coming in at 99 cents for 3.
My #HD Russian Cream wrapper smells positively yummy with strong notes of warm chocolate-milk mixed with sweet tobacco and light spice. The cold draw is sugary thanks to the sweetened tip plus dry hay, caramel, and mild tobacco.

Upon lighting, I was accosted by prominent cocoa flavors backed by whipped cream and wrapped in rich espresso on a premium tobacco base. I have to admit that the #HD Russian Cream does fall back flavor-wise compared to Backwoods and Sweet Woods probably because of the HTL wrapper. You will likely taste a bit of the noxious chemical taste that plagues all mass-market machine-made cigar with tobacco-infused paper wrappers and infused sweetness. Afterall, those are a lot of artificial ingredients for a single “natural” cigar.

My #HD Russian Cream experience was as solid as can be. It is a cheap cigar and it smokes as such. If you are a smoker who wants a simple uncomplicated cigar, this stogie fits just right. A pleasant smoke with a great aroma but nothing premium. 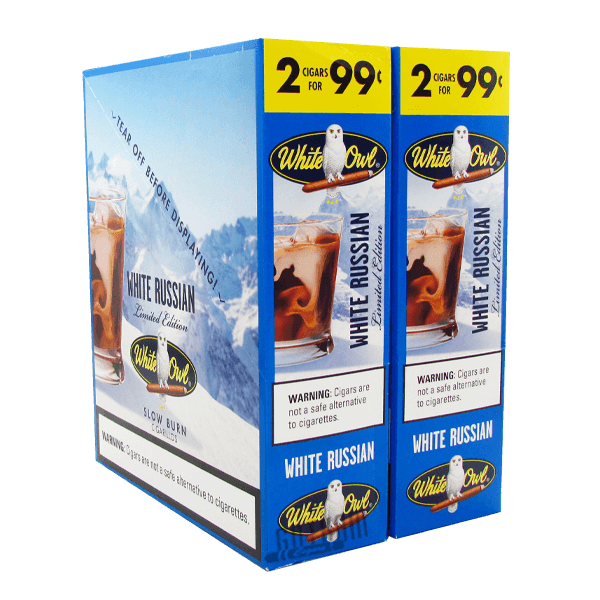 The White Owl Russian Cream is a product of Swedish Match, one of the largest and oldest cigar companies in the world. Swedish Match is home to some of the most revered cigar brands in the stogie market including White Owl, Garcia y Vega, Jackpot, 1882, and Game by Garcia y Vega among others. In addition to cigars, Swedish Match produces chewable tobacco, smokeless tobacco, matches and lighters, and pipe tobacco.

The White Owl Russian Cream is manufactured in Dothan, Alabama. It rocks exotic premium short-fillers from 5-6 countries and a 3-sheet type wrapper and binder. It comes in zip-lock packages that ensure the cigars stay fresh and moist.

This stogie is evenly packed giving it a clean torpedo-like appearance with the tip already cut off. Upon pressing, the body is slightly spongy but not airy. It is slightly longer than a cigarillo which places it in the blunts category.
Even though the wrapper is HTL, it does not smoke that way. My first draw is just the right degree of snug. I got an excellent draw with tons of smoke and a fusion of chocolate cream, rum, molasses, sweet tobacco, and a little spice to boot.

This is a short smoke. The great draw does not prevent this stogie from burning fast. I enjoyed the tobacco flavors more than I anticipated. I can honestly say this stogie has the best tobacco flavor of all the Russian Creams.
My White Owl Russian Cream smoked for 8-minutes which is faster than all the other Russian Creams. That didn’t bother me much because it is cheap at 99 cents for a pack of two.

White Owl Russian Cream takes the mantle for the best-tasting tobacco. Even with the HTL wrapper, the tobacco comes through as premium and flavorful which is more than I can say for the rest of the Russian Creams.

Why is Russian Cream Flavor so Popular?

Since its inception, Russian Cream has steadily overtaken other flavors on the most popular list. In my opinion, this is due to its warm, sweet, dessertlike disposition comingled with sweet tobacco. Also, Russian Cream cigars and cigarillos are cheap and available in online stores, actual cigar stores, convenience stores, and gas stations. This means the client base is basically anyone who wants a cheap delicious smoke for pennies.

What to do if your favourite Russian Cream is out of Stock Back orders and high demand for Russian Cream makes it difficult to perfectly time a RC purchase. If you want to be ahead of the game when purchasing your favorite brand of RC, I have a tip for you.

So, your brand is out of stock, look for the “In Stock Notify” button and click on it. Next, enter your Email Address in the provided box. This will subscribe you to our list of customers who get notified every time your favorite brand of cigars is in stock.  It is in our nature to ensure you get the cigar you want. So, if its Russian Cream you want, Russian Cream you shall have.