The Montecristo Espada Ricasso, this golden treasure made from 100% Nicaraguan tobacco was created by the world famous cigar blenders Altadis and Plasencia Family. The collaboration of the Grupo de Maestros has resulted in creating a true masterpiece showing the power of the legendary Montecristo "Espada", the Spanish word for sword describes the true elegance of this exquisite and complex premium cigar. The Montecristo Espada Ricasso is a medium to full bodied cigar with a rich taste of spices, coffee and nutmeg flavors.

Montecristo Espada Ricasso features a light tan wrapper of Habano Jalapa Vintage 2010 tobacco leaf and a blend of vintage Nicaraguan fillers from Jalapa, Ometepe and Condega. The smooth and easy draw will give you a long-lasting enjoyable smoking experience. Our exceptionally low price on this amazing cigar will also add to your enjoyment.

The Espada comes packaged in unique suede boxes that each contain 10 cigars. When you take a cigar out of the box, the first thing you’ll notice are the three large bands around the cigar. There’s the distinctive Montecristo band, a certificate around the middle of the cigar, and an “Espada” band wrapped around the foot of this cigar.

Upon first inspection, the Espada looks like a typical premium cigar. Its wrapper has a medium- brown color, and there is a slight sheen of oil. There is some visible veining, but not too much. The cigar is firm and tightly rolled.

The Espada’s aroma is earthy with a hint of spice. Unsurprisingly, the pre-light draw of the Espada is also earthy, with some spicy undertones and a hint of sweet tobacco.

As the cigar reaches the midst of its first third, the citrus and pepper flavors get stronger and the sweet tobacco flavor fades into the background. Around this time, hints of coffee start to balance out the Montecristo’s flavor profile.

Its in the mid-third part of the Espada that the cigar really shines and shows why it is so highly rated. At the beginning of the mid-third, the citrus and pepper notes have faded to background flavors while the coffee and sweet tobacco flavors dominate. The pepper notes were less spicy than they were in the first third of the cigar, with a taste more reminiscent of white pepper than of jalapeno. As the Espada passes through its mid-third portion, the delicious natural sweetness of its high-quality tobacco provides a delectable background to the notes of pepper, coffee, and citrus. 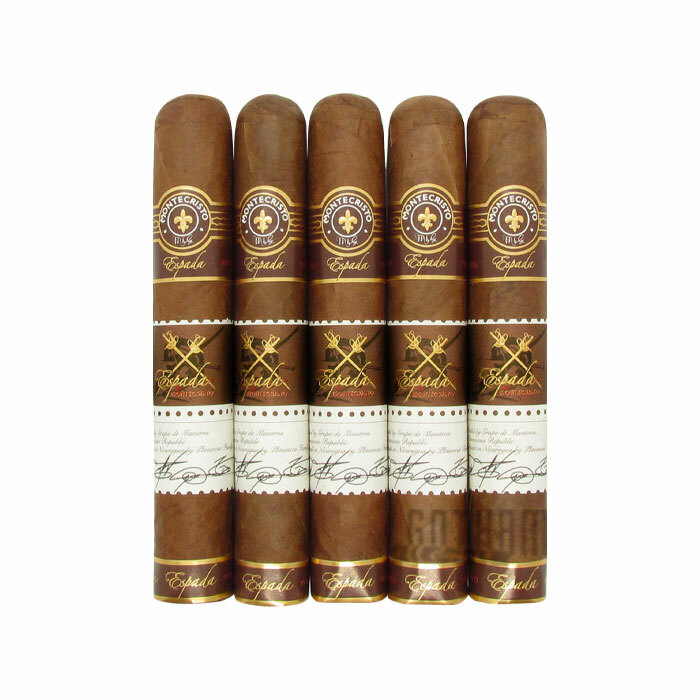 The Espada burns cleanly and evenly right down to the nub. The smoke does not get hot, and the nub does not get mushy.

The Montecristo Espada is Worth Trying for Fans of the Brand

In conclusion, the Montecristo Espada is quite different than what most cigar lovers expect from Montecristo. The origin is different, the blend is unique, and even the look is distinctive. However, this is not necessarily a bad thing. The Montecristo Espada is on the top shelf of cigars, exactly where you’d expect a Montecristo to be. It breathes fresh life into a prestigious brand that had started to get a little stale. The Espada is certainly worth smoking for fans of Montecristo cigars.