Alec Bradley is a significant brand in the tobacco industry. The Alec Bradley brand began back in the year 1996 and it was part of the latter portion of the cigar boom of the 1990s. The brand initially wanted to target golfers with their cigars, but this did not work out too well and Alec ended up meeting Ralph Montero in a brief encounter. The two of them contacted Henke Keiner, who was a widely known figure in the cigar industry, in order to create the Occidental Reserve cigar.

This cigar sold relatively well after they reached out to retailers to sell it and Alec Bradley wasn't in debt anymore. The Tempus line of cigars really made Alec Bradley stand out in the cigar industry since it was a strong blend instead of a mild to medium-bodied smoke. The headquarters of Alec Bradley is located in Dania Beach, Florida.

You should also know that J. Fuego Cigar Co de Nicaragua has a lengthy history of involvement with the cigar industry. They have been growing, blending, and creating cigars beginning all the way back in 1876. J. Fuego Cigar co de Nicaragua and the Alec Bradley brand have now been collaborating more in recent times. The blend of the Project 40 Maduro cigar is quite similar to that of the previous Project 40. The filler is completely Nicaraguan, which is one similarity it shares with the previous cigar in the Project 40 line.

It is also important to discuss the binder, as well. The binder is a Brazilian Habano binder and this is the same type of binder found in the Project 40 Maduro's predecessor. However, there is one significant difference. This difference is the wrapper since the wrapper is a Mexican San Andres, in addition to being a Maduro wrapper. In the previous cigar, the wrapper was a Nicaraguan Colorado wrapper and the other difference is the selection of sizes you have available. The previous cigar had four different sizes, but the Project 40 Maduro comes in three different sizes.

The three different sizes are 5" x 50, 6" x 52, and 6" x 60. The Project 40 Maduro cigar originally came about in October of 2020. When it comes to the different tobaccos that are used in the cigar, it was created utilizing curated tobaccos from Brazil, San Andreas, and Nicaragua. As previously stated, the blend is similar to that of the original Project 40 cigar line. However, the wrapper of this new Maduro cigar is also interesting as well.

The wrapper of this cigar has a unique sweetness. If you are a Maduro smoker, you will likely be familiar with this sweetness and enjoy it. Additionally, the wrapper is dark brown and it has a respectable level of tooth on it. 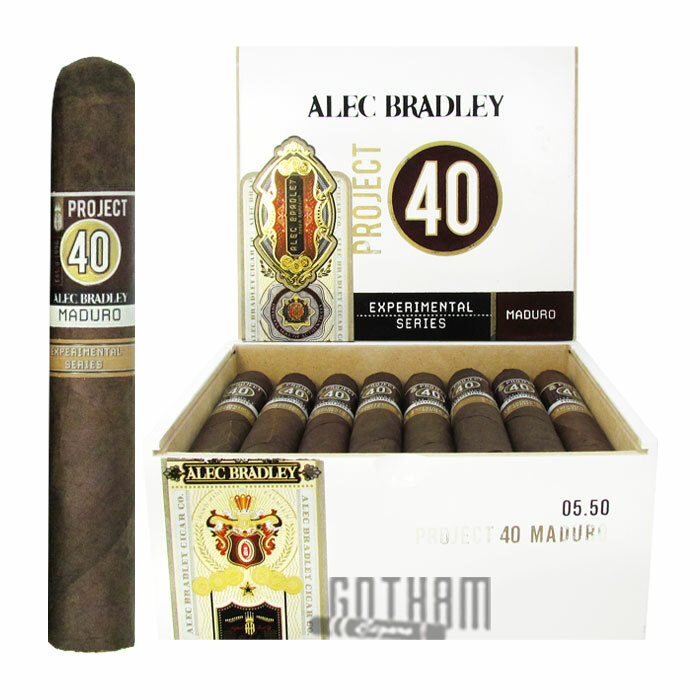 The experience of smoking this cigar is unique due to all of these flavors. When smoking the first third of the cigar, you can pick up on the cocoa flavor notes quite easily. The other flavors that were mentioned previously also add to the cigar's overall flavor profile at this point when smoking it. The retro-hale provides you with an interesting combo of red pepper and dried fruit. 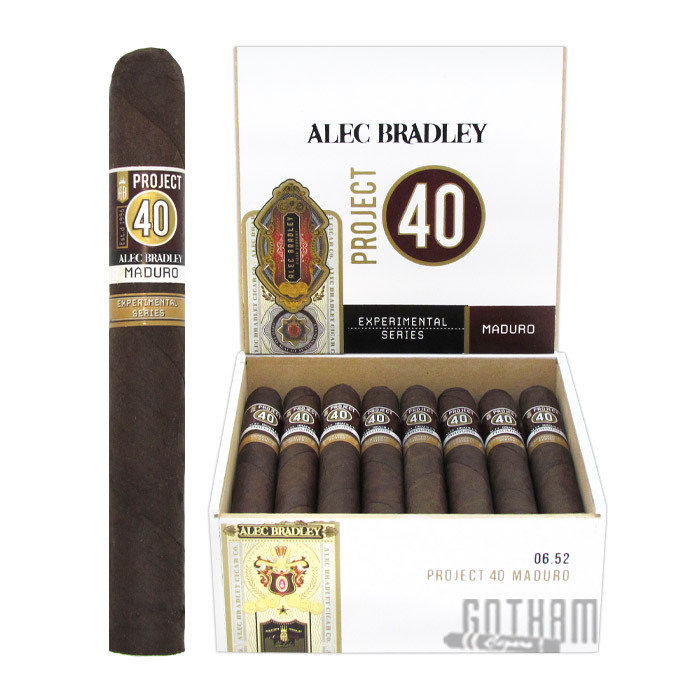 The final third really made the earth notes stand out. You can also notice the pepper flavor a bit more while smoking the final third of the cigar. The cocoa, fruit, and cedar flavors were still noticeable at this point, though. It is also worth noting that the Project 40 Maduro by Alec Bradley received a 93-rating.

The Project 40 Maduro cigar has two bands and the primary band includes a brown background along with white trim. The badge logo of the Alec Bradley brand is at the top of the band and the words 'Project 40' are in white font. This cigar also includes the text 'EST 1996' since the brand was founded back then and it includes the words 'Alec Bradley' on the lower part of the cigar. The lower white trim includes the word 'Maduro' in a dark font. The secondary band of the cigar is a tan color and has two pinstripes in dark colors close to the top of the band and the bottom of the band.